Fight for the throne with Battle for Olympus slot created by famous company Cryptologic. Are you ready to become Zeus to conquer the realm and begin to rule Olympus and Earth? 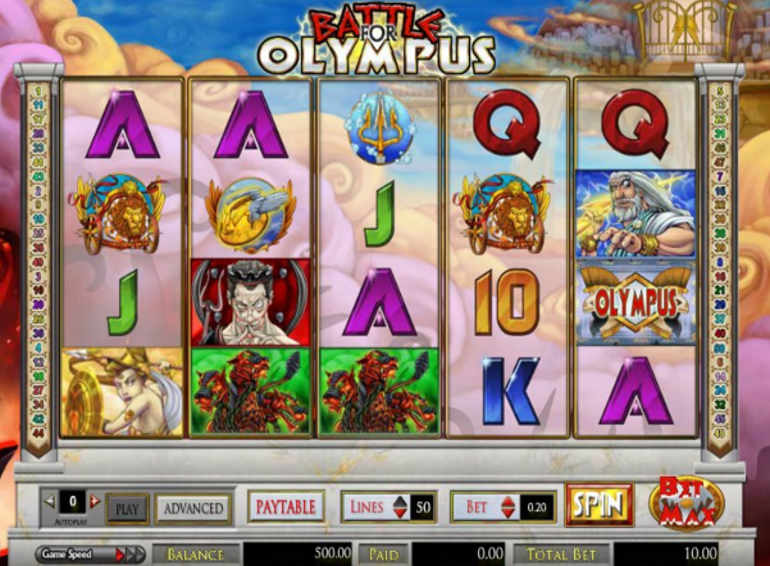 Or you will lose that battle and will have to rule Underground Kingdom, as Hades has to? Just spin its divine 50 lines and decide which side you like the most. Greek Mythology theme is appreciated by lots of players that is why it is so widely used. Play Coins of Olympus slot machine presented on our site and learn how it is revealed by Rival soft provider.

Battle For Olympus Slot - What Is Happening On Heavens?

Getting involved in this divine fight you will have no way back, just forward. Thus, make all appropriate settings with wager lines altering it up you reach the highest point – 50 lines, as well as placing your stake per line. You have numerous options starting from the lowest limit – 0.01 coin per wager line and going up to the highest wager – 10 per line. Thus, you will place 500 coins on total wagering.

For rapid settings use Max Bet option, which wager the highest stake per one line available in Battle for Olympus slot game . Regulate all those items due to your balance, bet wisely and win!

Autopay mode settings include two variants, the first one - simply regulate amount of lines and launch the mode. However, the second option – Advanced one – offer you advanced settings with choosing amount of stake lines together with bet per line, as well as conditions for stopping this mode - indeed this option makes real money slots gambling even more interesting and exciting!

Convincing Reasons To Start The Battle

Feel that celestial power gambling for Zeus or, as his brother Hades. Zeus killed his father and took Olympus, but Hades hated to be underground ruler and when 3 special symbols – Battle on the 1st reel, For on the 3rd one and Olympus on the 5th reel appeared Battle was started. Now, dear Gambler, choose your side and fight as a God. This battle between two brothers lasts 5 attacks during which click on special icons to beat your enemy. For each round you will be credited with prizes.

Another worth mentioning character of Battle For Olympus slots is Goddess Athena – wise and charming lady – is incredibly lucrative reason to start gambling this slot. Playing as Scatter it pays the multiplier. Three charming Goddess can just double up your general wager, however four will increase it 25 times, whilst five – 250 times! Zeus and Hades themselves are incredibly profitable figures too. Moreover, this slot accept their mix – Zeus and Hades at the same time, of course, with a bit lower payouts, but still high enough.

Dreadful three-headed dog known as Cerberus is real Wild icon with its own multiplier – it triple all wins.

Other gameplay icons are united to Greek mythology and are Helios chariot, Poseidon trident together with Hermes helmet with wings, in parallel with well-known cards.