From the mystical depth of the Nile river and the pantheon of ancient gods comes the inspiration for Egyptian Magic slot game. The digital seals on the tombs of pharaohs, which are hiding immense treasures, are waiting to be broken. 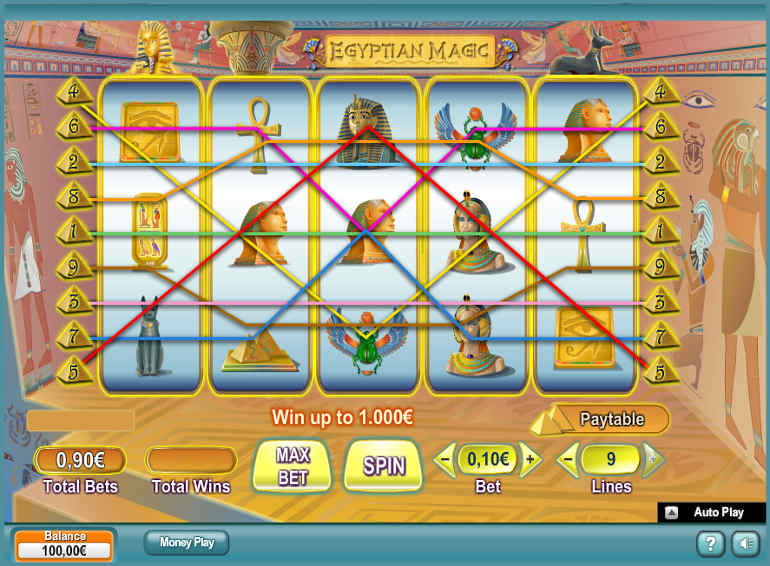 To find your way to fortune and treasures of ancient civilization you must first learn how the the things in Oriental Magic work, though this knoweldge is also perfectly revealed in other Egyptian slots presented on our site. This game is a classical five-reeled game which offers a maximum of nine lines for betting.

Another two active buttons that you will need playing Egyptian Magic slot machine are «Max Bet» and «Spin». The first button is meant for high-stake gamblers. When you press it all paylines will be activated and the maximum bet of 20 Euro per line will be placed. «Spin» button is used for starting new round (the autoplay function is unavailable in the game). Your total current bet will be displayed in the window «Total bet». «Total Wins» window will display the amount of your current win from all paylines during the last spin.

The Brave Will Be Rewarded

At the screen's right side (lower part) you'll find the «Paytable» button that opens same called section describing the games rules and symbols denominations in a way inherent to all NeoGames online slots. By pressing it the menu with the payments for all possible combinations of symbols will be brought to the screen. The most valuable icon is Pyramids and you'll get the highest reward for combinations with them. In Egyptian Magic slot wild symbols are depicted by the Sphinx and serves not only as a substitute for other icons (excluding Scatters) but also as a multiplier. Each of such symbols, if it appeared on one of the winning paylines, will multiply your reward by x2. The Scatter is featuring a bust of Egyptian Queen and can multiply your prize by as much as x32 (five Scatters needed for that). The free of charge demo version is available on our online resource but you won't feel real heat of the game until you switch to real money play. You must remember that the rewards of the ancient Gods and their vicegerents on Earth can be gathered only by the brave and fortunate gamblers.