Just imagine that everything you touch turns to gold…gold… shining gold… Sounds like ancient Greek legend? Yes, it does. Moreover, that legend became the starting point in the Midas Millions slot machine created by Ash Gaming. 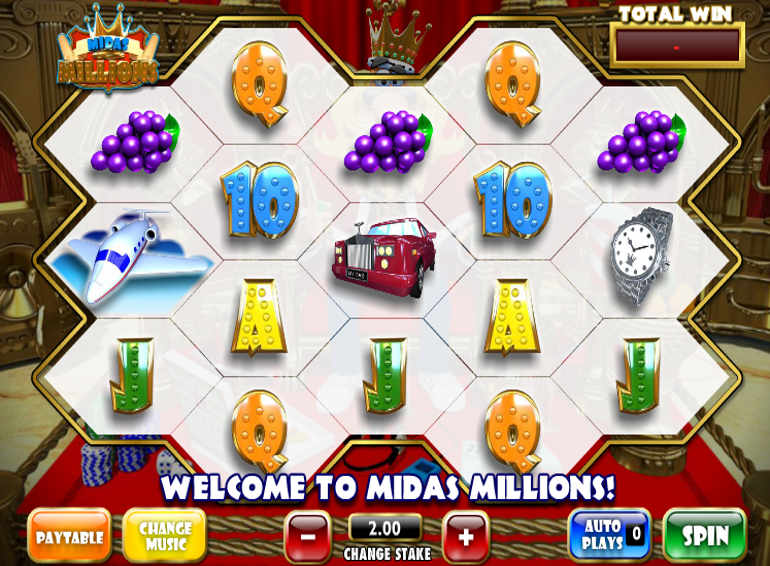 Meet face to face with modern version of King Midas, share with him pizza and popular music, as well as earn some money with his generous assistance. Add here 118700 ways to gain victory with this game and you will surely want to launch it right away!

This slot is something new in slots-making industry. The first reason, it is appearance – it is shaped as bees’ cells and reels don’t rotate as we used too – each cell rotates separately. It is even better to say that it is turning on with each spin. That’s why this game doesn’t have wager lines and reels, but symbols are creating various groups, and more icons of a kind you will collect, the higher payouts will be!

The next reason that makes Midas Millions slot game so special one – music selector. Even though right now it has only two songs there “King Bling Beats” together with “Golden Groove”, they create special atmosphere whilst you spin those cells. At the same time you can manipulate with songs’ volume, as well as simply turn it off. Just click on the button Change music and make all adjustments.

Also, operating with Change bet selector set the most appropriate wager for you from its minimal limit – 0.10 up to the ultimate one – 500 per spin.

For Lazy ones, user-friendly auto plays mode is involved – start from 5 auto spins and go to the highest one – 25.

As a rule, Paytable section display all data about icons, its value as well as peculiar rules.

To get a nice payout from Midas Millions slots paytable you need to create combos of the same symbols placed side by side - surely gambling fans find nothing new in this rule as it is commomly used in all slots played for cash and free. Combos are starting from 4 symbols and its number goes to 12. There are following icons, you will face on its cells – cards symbols from Ace to 10 designed in luxurious style, private plane, Champagne, grapes, car and watches.

As about Midas Millions slot main game, Connecting Wild can replace only one symbol in group, Golden Wild makes symbols gold ones. By the way, spinning reels at the ultimate wager point – 500 – and collecting 12 symbols of a kind (for instance 12 grapes) turned into golden ones you can earn the million! Super Wild icon makes 6 neighboring symbols golden ones. Also, golden symbols doubles the payouts for combos.