Do you still think that Russian company Igrosoft cannot amaze you? In such a case, spin Resident slot machine reels and you will enjoy this military themed slot machine with its special gamble game together with exciting features. 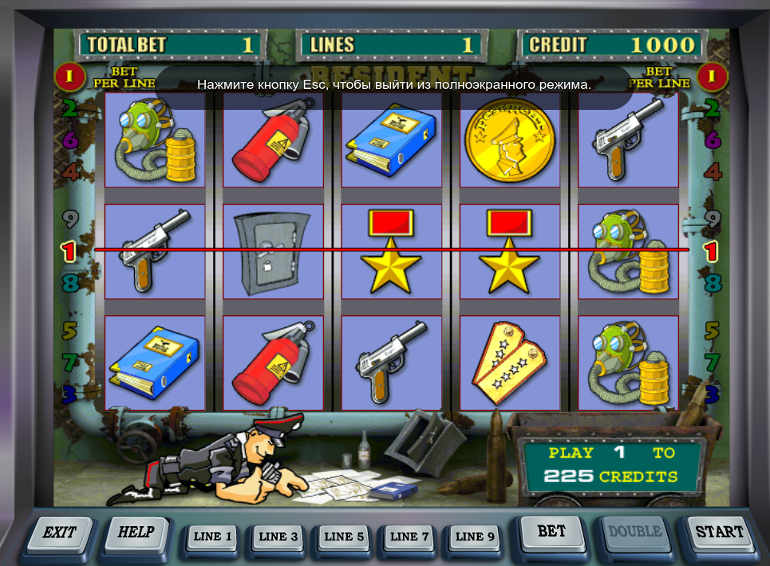 Thus, if you feel tired of so widespread egyptian themed slots, try this 5 reels video slot machine and learn how to deal with real weapon and other military gadgets to become the Resident.

For beginning gameplay just press Start push button and enjoy your frequent lucrative wins – by the way, this is one of the numerous Igrosoft distinctive qualities.

Igrosoft software developer is famous for it video game machines. Setting alterations is as transparent as it is possible at this video slot – operate with big push buttons below the gameplay screen and choose the necessary wager amount, as well as stake lines. This video slot machine is formed with 9 wager lines. For altering its amount press on proper Lines’ push buttons.

After placing its amount, enlarge or make smaller your wager with Bet option. At the same time, for placing the highest stake automatically press on Max Bet button and Resident slot gameplay will be triggered with the ultimate wager – 225 credits.

All icons description with its payouts and game features is hidden behind Help push button. Gameplay is pleasant and smooth, thus it will attract both skilled players and freshers. Add here nice sound track and musical background together with funny animation and you will get clear picture about Igrosoft Company – famous for its creativity and sense of humor.

Autostart button opens autoplay mode and rotates reels automatically until you stop it.

Fire-extinguisher together with lock box are peculiar symbols triggering special bonuses at this video slot machine by Igrosoft. The first one is Wild icon and replace all other icons, but not lock box and round golden medal, which is the priciest icon in the gameplay.

As about three and more lock boxes, they open feature game with 4 lock boxes. Open them and stay alive, collect your winning prize and choose the right door with Radio-Cathie to be awarded with incredible payouts!

Traditional gamble round by Igrosoft is included in free Resident slot machine too. Although it differs from double game featured in Novomatic online gaminators, it has much interesting aspects we`d like to tell about.  After each winning combo, you are offered either double wins or collect them. The distinctive thing about its gamble video game – you can collect your money after opening this special bonus game round, but before revealing your card. Thus, you have three option here: