When two prominent ancient civilizations are gathered together at the Rome and Egypt slot free demo powered by WMS company, real adventures are promised to players. Cleopatra and Caesar are represented here for the most lucrative payouts and as two wilds, Rome and Egypt feature and functional options panel that can be used in two different modes are included too. If you don`t mind to enjoy some other historical plots, test Egypt Sky EGT slot online. 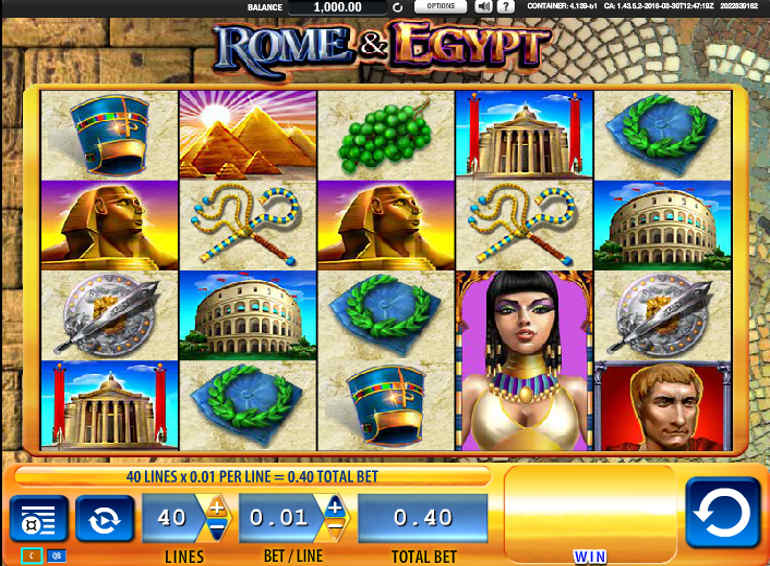 Add to its list 40 paying lines with numerous ways for creating combos on it and you will see the whole WMS creativity in slots making. Test this game in fun mode and try to find out which civilization was the most gorgeous and powerful.

WMS company has found out convenient way for placing wagers before game is started – they added quickbet panel in parallel with classic one. In the bottom left corner two small buttons “c” and “qb” are placed:

Rome and Egypt slot machine can be played automatically too – just click on the specially created button for it and launch auto spins. Also, operating with Options it is possible to make advanced settings for automatic rotations like Duration, Balance and Single outcome. Place tips for certain conditions and autoplay mode will be stopped not only after fixed amount of spins, but also when desirable award will be gained and so far.

Click on Paytable button to read the survey about symbols, paying lines and some peculiar features. Help section with expanded rules is added too. Press on “?” for opening it.

In Company Of World Rulers

Caesar is the most powerful icon in the game, though the image of Imperor appears in some other games too - play Luxury Rome slot by iSoftbet to see what options it performes there. First, they are wilds and replace all other ordinary icons like Pyramids, cane and whip, plums, the Sphinx, Colosseum, laurel wreath, Egyptians hat, grapes, Pantheon, sword and shield. At the same time, they are the most lucrative symbols during the gaming process: five icons with Caesar or Cleopatra award players with 2500 credits (it alters due to the current wager). If those icons are mixed – 1500 credits.

Occupying the whole reel those symbols act as stacked and Scatters. As Scatters they trigger Rome and Egypt slot game feature: