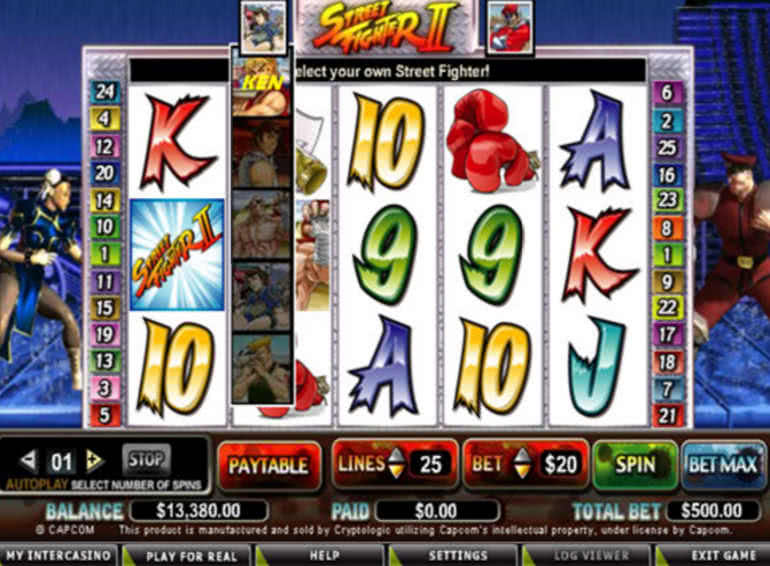 Try to spin its luxurious 25 wager lines and this game will immediately occupy peculiar place at your top games list. Want to add couple of other items to it? Check all Cryptologic slots we suggest to gamble on our site.

Street Fighter 2 video slot machine was created by Cryptologic. Before you set necessary settings at the wager section and make up your mind about pay lines amount, you need to set your Street Fighter choosing in between main heroes of the game. There are Sagat, Ken, Chun Li, Ryu and Guile. If you pick up Ryu icon it will be landed only on the 2nd reel and act as Wild icon. And on the 4th reel will appear Bison symbol behaving as a Wild symbol too. If you catch them simultaneously – Ryu and Bison – you will start incredible feature.

Place your wagers for fighting with Bet button and its arrows. Street Fighter II slot game by Cryptologic comprises diverse wagers from the minimal points like 0.01 up to the highest – 20 per line. If you set all 25 wager lines with 20 coins per line, the total wager will be equal to 500 coins. The ultimate stake – Bet Max button – takes on wagering all 25 lines, which are alterable with arrows at the Lines section.

Operate with Paytable to learn rules and payouts for icons together with getting info about Fight Feature. Here all winning combinations are valued in free credits as well as your wins will be also completed from them. But in IWCasino online they know how to turn credits into cash, play this game there and boost your bankroll with real money.

And, of course, spin those reels and stake lines in Auto Play mode just setting appropriate number of spins either 5 or 15 spins, etc.

Bison And Other Special Characters

The main feature in Street Fighter 2 free slot is started when Fighter and Bison appear on appropriate columns coincidently. We liked its graphic and design of video slot machine – reels disappear and player can watch the Fighter in the full length, as well as Bison. With each spin they start fighting till one will beat another. To complete this task with each rotation on 1st and 5th reels appear special icons: Star, Boots, Fists as well as Fists and Boosts. Star gives right for Fighter or Bison to use his special power.

Boots – kick and Fists – punch, whilst Fists and Boost – all together. On the 1st reel appear action that Fighter can use, and on the 5th column – Bison. Above the gaming field there are health meters for both characters. When Street Fighter kicks or boosts, player is awarded with prizes. During the bonus games expanded reels acting as Wild symbol.

Street Fighter 2 online slots logo is Scatter icon and it is irreplaceable by Wilds. Other symbols taken to the fight are sculls, shuriken, muffles, mask together with the claw and traditionally selected cards.

Yoe can play Street Fighter 2 video slot machine both for free and for real money.